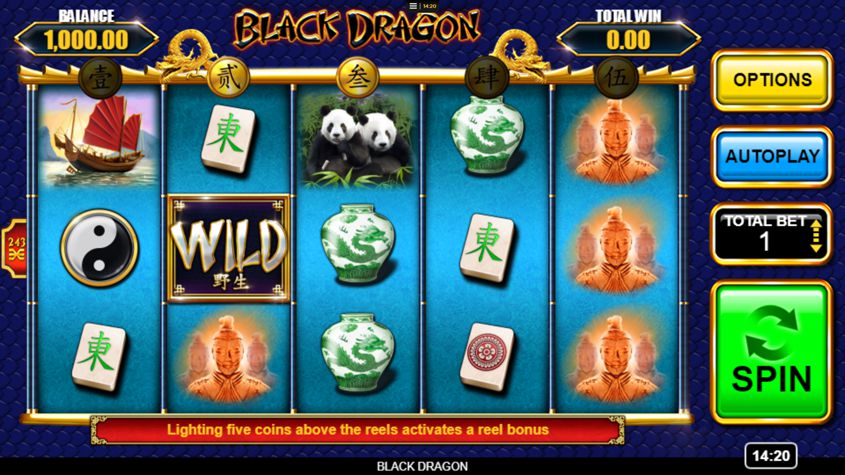 Play for Free
Play for Real *

You’ve been successfully age verified!
Please wait while we check your details.

Visitors must verify their age before playing free slots

Quick, easy and I was playing free slots in under a minute. - Chris H

0 Votes
0 out of 5 stars
Write Review

Black Dragon is an online slot created by Inspired Gaming. This 5x3-reel game has 243 ways to win, and features include wilds, free spins, expanding wilds, a pick me bonus and reel modifiers. The RTP for this low-variance slot is 94.86%.

Black Dragon is yet another dragon themed slot. So what makes this 5x3-reel, 243-ways game stand out from the rest?

This game gets its appeal from the entertaining bonus features. There’s a clever collection bonus that serves up a choice of reel modifiers that guarantee some big wins. Add in free spins, and you have a well-balanced slot that’s a lot of fun to play.

The features are different enough to make a few practice spins worth a play. You can find a choice of Inspired Gaming slots for free play at Slots Temple.

Black Dragon isn’t about to win any beauty contest prizes, but the central character of the Black Dragon has a fascinating history. In the West, a black dragon is evil incarnate, but in Chinese culture, its meaning is more complex.

A black dragon symbolises vengeance, and a lightning storm is said to be caused by two black dragons fighting for dominance. Black dragons are also associated with the north and winter, which is why Daenarys’s dragon Drogon was depicted in black and red in Game of Thrones.

There’s a real mashup of visual styles, with 2D and 3D graphics sharing the reels with photos of pandas. The design isn’t particularly cohesive or successful and not a lot of thought has been put into the background, but the symbols are undeniably Chinese - Mah Jong tiles, Ming Vases and Terracotta Warriors among them.

Black Dragon is a low-variance slot with 94.86% RTP. Risk-takers should probably steer clear, although the maximum 250,000-coin prize says this slot has decent potential.

How to play Black Dragon

This RTG slot has a functional player interface that makes it easy to get your game set up. If you haven’t played a slot from Inspired before, here’s what you need to know:

There’s plenty here for casual players and risk takers to enjoy, with bets ranging between 0.20 and 100.00 coins per spin.

Wins are multiplied by your total bet, with the biggest base game payouts when you land five of a kind as follows:

Black Dragon has a decent choice of bonus features, which are triggered by the special symbols. The Wild will substitute for all other symbols except the Bonus.

Any wilds will expand to fill the reel and lock in place for up to three spins. Land three or more bonus symbols on consecutive reels to retrigger the free spins bonus.

There are five coins above the reels. Land a coin symbol on the reel to light the corresponding coin. Light all five coins to trigger the pick and win bonus.

After the bonus has been played, two, three or four coins will be lit when you return to the base game.

Once all five coins are lit, you trigger this feature. Three chests appear, each containing a different reel bonus for you to choose.

There are three reel bonuses available:

Black Dragon isn’t the prettiest game in the world - if you want amazing dragon-themed graphics, try the Dragon's Myth slot from Rabcat - but with up to 250,000 coins up for grabs, it’s worth a spin.

We enjoyed the range of bonus features, and there’s some decent potential from the reel modifiers. It’s unlikely you’ll hit the biggest wins in this low-variance slot, but it keeps the wins and bonuses coming.

* Although we try and match games with Casinos that have them, we advise that you double-check the slot content on the casino before making a deposit.

What is the RTP of Black Dragon?

What’s the volatility of Black Dragon?

Black Dragon is a low-variance slot.

What is the maximum win in Black Dragon?

Does Black Dragon have free spins?

Land three or more scatters to trigger up to 20 free spins with expanding wilds, retriggers and an entry bonus of 20x your total bet.

There are no reviews for this game

Be the first to write a review