Follow the Rainbow and grab that Pot of Gold!

Feeling Lucky? Get your hands on Reels of Gold!

Here at Slots Temple we love Rainbow Riches so much so we devoted a section of the site to it! So if you love the game like we do, you’ve just discovered the pot of gold at the end of the Rainbow! Grab a Guinness. sit back and let the delights of Rainbow Riches wash over you!

Established in 1968, developer Barcrest is a known name in the slots gaming industry that now flies under the banner of Scientific Games. One of its biggest hits, Rainbow Riches, debuted in 2006 and has gained legions of fans and spawned several sequels since then. This legendary game is a 10-payline, five-reel slot that is all about the luck of the Irish and, naturally, the fabled leprechaun himself. This popular title features scatters, wilds and two different bonus rounds.

Here at Slots Temple, you can try out this hit title and other Irish-themed games from the world’s leading developers without registering or making any deposit. All our games have been optimized to play flawlessly on desktop PCs, tablets and mobile devices so you can try your luck at any time.

Rainbow Riches Pick ‘n’ Mix, part of the Rainbow Riches line of games from seasoned company Barcrest, has 5×3 reels, 20 paylines and a deep green background with vivid graphics. The poker card values on the reels mix in seamlessly with the Irish-themed symbols, such as of pots of gold and a jaunty leprechaun. There are a whopping five bonus features in this game, and players can choose exactly which ones they want to appear in the game, with up to three allowed at one time.

Barcrest displayed some of the innovation it is known for in this Rainbow Riches entry, Rainbow Riches Leapin’ Leprechauns. Instead of a traditional reel slots game, this title is an interactive instant win game with lively animation. Players join with an adventurous leprechaun who is making his way along by jumping from platform to platform. On each platform, there can be prizes, powers-up or obstacles for the little green man to conquer, and there is the possibility of finding little pots of gold for prizes.

With Rainbow Riches Reels of Gold, Barcrest decided to shake some things up. This colourful game has 5×4 and 5×12 reels that are side by side. It is packed with features, including three bonus games, free spins, more than one type of wild and multipliers than can go as high as 5x the stake. In keeping with the Irish theme of this game series, symbols include a playful leprechaun, rainbows, lucky four-leaf clovers and even some countryside mushrooms. Despite all that is going on, the game has an easy-to-use interface that even inexperienced players will be able to follow. 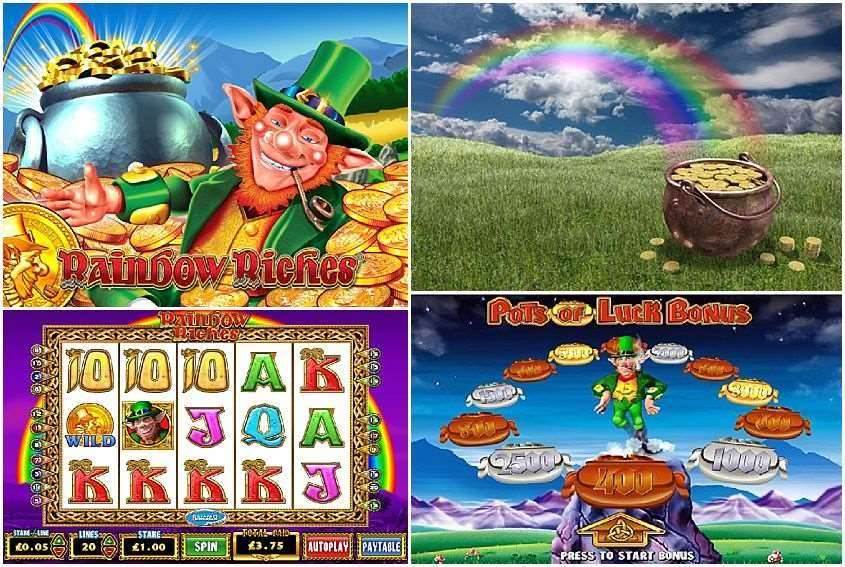 Players who are ready for a game that screams “party” need look no further than Barcrest’s Rainbow Riches Win Big Shindig. In this game, Barcrest shows off its ability to nail the details, as a playful Irish tune plays any time a winning combination is hit. This game offers 10 paylines and five reels, with bold graphics and Irish-themed icons such as a leprechaun on a gold coin and the famous green hat worn by the legendary creature. A bonus round, wild symbol and a Gamble option that offers an 8x multiplier round off this entertaining series entry.

Founded in 2002, Realistic Games offers slots that are both vivid and have a slick flow and rhythm for players. The exciting 20-payline, five-reel Chasing Rainbows puts these talents on display, with its regal castle background set off by multi-toned rainbows sweeping up the sides. Here, players are placed right in the middle of medieval fantasy, with icons of dashing princes, fire-breathing dragons and the unicorn in play with well-designed, high-value playing cards. There are also wilds and a bonus feature that offers free spins with a chance at flooded wilds.

Ireland is the true star of Rainbow Jackpots from Red Tiger Gaming, which was started in 2014 by a team of industry veterans who are dedicated to improving the player experience. With Rainbow Jackpots, it is safe to say their mission has been accomplished. With five reels, 20 paylines and a witty leprechaun who randomly has something to say, players will find this game both amusing and engaging. All the main icons here reflect the Irish theme, from lucky clovers to the glittering pots of gold, and there’s also a shiny wild, a game for free spins, bet multipliers than run as high as 800x, and even a beer bonus round.

Over The Rainbow (Realistic Games)

For a player who wants that Vegas experience without all the bells and whistles, Realistic Games offers the slick Over the Rainbow, which also features the developer’s trademark smooth game play flow. There are three reels with one payline, and the design is reminiscent of traditional slots found in the some of the world’s biggest casinos. While this is a simple game without free spins or bonus features, its multiplying wild and 20,000-credit jackpot make this title worth a try.

Players who are looking for a visual stunner are sure to be pleased by Lucky Leprechaun from Microgaming, the industry innovator who launched the first true web casino back in 1994. This game has 20 paylines, five reels, free spins, stacked wilds, an exciting bonus round and graphics worth writing home about. The reels have a stunning blue sky, green hill backdrop and are decorated by Irish-themed icons such as Guinness pints and high-value cards in a Celtic design. Irish jig music sets the tone for the game, and there are even multipliers of up to 1,000x the stake on deck.

The leprechaun may be the most famous bit of Irish folklore in popular culture today, and Genesis Gaming pays tribute to the little green man in Leprechaun Legends. Established in 2008, Genesis Gaming is known for its game performance and popular themed slots, and this Irish entry certainly delivers. With five clear reels against the backdrop of a sunlit forest, this game is visually distinct and also offers a stunning 50 paylines, scatters, wild symbols and bonus features.